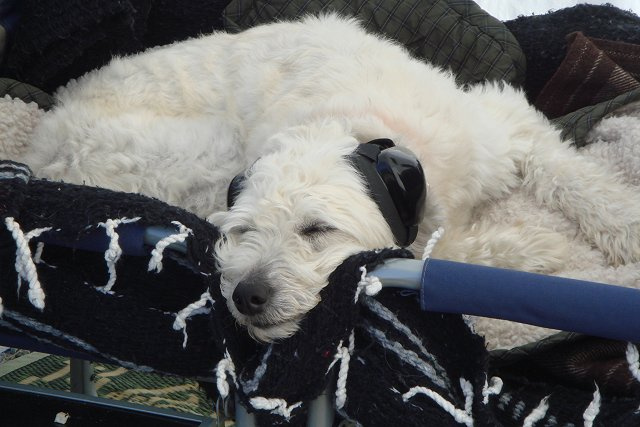 Ruger goes with us to as many "shoots" as possible. Now that I'm vending at them, most of the time my tent is very close to the firing range and the noise can be quite loud. Ruger doesn't much like the gunfire, but isn't spastic about it; he just gets a bit antsy and nervous, sticking very close to me and panting some. This past weekend we went to the North Carolina State Championship Shoot and, since we'd been there before, I knew how close I'd be to the firing range and that Ruger would not be happy, but would also want to stick close to me. So, the search for a solution started a couple of weeks ago and ended when I found "Mutt Muffs." (They were invented by a pilot for dogs riding in the cockpit of a plane.) I admit I was skeptical, but figured it was worth a try. I put them on him Thursday afternoon during the sidematches and he never even flinched during the gunfire. And he never really tried to get them off. Once or twice he shook his head, but seemed to catch on quickly that the noise was lower with them on. Friday was the first day of the main match with over 200 shooters, each one shooting over 125 shots including pistols, rifles, shotguns. Ruger slept through most of it, but would happily meet and greet any new "friends" who wanted to check out his new garb. I've never seen him so completely relaxed. So, if you run into anyone who needs canine ear protection for any reason, Ruger and I both thoroughly endorse MUTT MUFFS!!! Becky