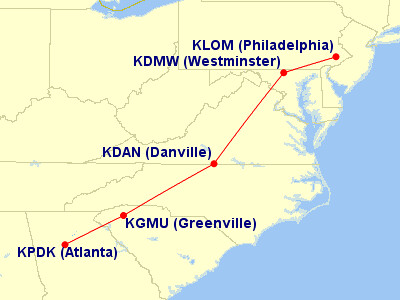 As told by Rosemary with Faith's Hope Rescue

Ginger was in a kill shelter in Clayton County, GA and her time was up.  One of the shelter volunteers agreed to foster her until a home could be found.   She tried to find Ginger a home on her own but was not able to, so she sent out a plea to the rescue community asking for help finding Ginger a home or taking her into their rescue.   Ginger got the best Christmas present ever… a family of her very own!   In Philadelphia.

Radar ended up at Hall County Animal Shelter in Gainesville, GA.  He was surrendered by his previous family, the reason they gave was that they had "too many animals." One of my foster mom's in GA, Lisa, happens to live very close to this shelter and I guess gets the emails about the dogs they have there and she sent me a picture of Radar. I asked her to go meet him and if he was nice to pull him as he also was about to be euthanized. Lisa has been fostering Radar for about a month or so while we worked out transport to Philly and he has done very well there. He is sweet although a bit mischievous at times ; )) Still acts very much like a puppy although his previous owners told the shelter he is 5 years old.

Lolita - I got an email from a volunteer for the Murray County Shelter in Chartsworth, GA about a "senior" Chihuahua female that was on the euthanasia list.  I got the email on a Friday I think and Lolita was due to be put to sleep the following Tuesday.  Lolita, according to the shelter, was a "stray." They also said she was about 8-10 years old and that the "lumps" on her chest were probably mammary tumors. Lisa took Lolita to her vet to get her a health certificate and Lisa's vet thinks she is probably only about 3 or 4 years old. Not sure what the tumors on her belly (not on her chest) are ... I don't think they are mammary tumors though. They maybe inguinal hernias, hopefully nothing serious that can be easily fixed when she gets spayed.