Travis Nevins '17, a trumpet player in UNH's pep band, and his guide dog Mathis, with Gnarlz. 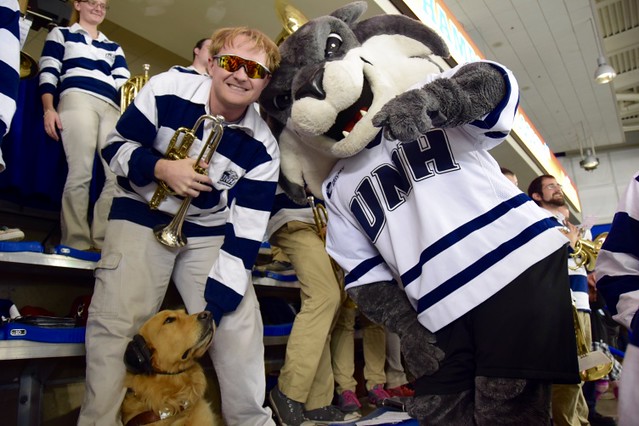 Nevins, an information technology major and trumpet player in UNH’s pep, jazz and symphonic bands, has Stargardt's macular dystrophy, which causes a loss of central vision early in life. He is considered legally blind, as impaired central vision affects his ability to see detail and color.

That’s where Mathis comes into play. The duo met at the Guide Dog Foundation in July 2015, and they have been inseparable ever since. The foundation matches highly trained guide and service dogs with people who are visually impaired or have other disabilities.

“I bonded with Mathis so quickly, much quicker than anyone else at the course,” says Nevins. They completed two weeks of intensive training, learning commands and forming a relationship. Mathis’s ears perk up as soon as he hears his name. “See, he knows I’m talking about him,” says Nevins.

The pup began attending hockey games in the fall of 2015 and has become a popular affiliate. “I always look forward to seeing Mathis — and Travis, of course,” says Alex Sparks ’18, Nevins’ fellow trumpeter and friend. “Having a dog around is a lot of fun.”

“He’s become the mascot of the bands,” says Casey Goodwin, director of UNH athletic bands. “Everybody loves him. Having both of them has been fabulous.”

Mathis generally sleeps through the games; most fans don’t even notice he’s there. “He’s always snoozin’,” says Nevins. “As soon as he’s off the harness, though, he acts like a puppy again.”

Nevins doesn’t let his disease affect his passion for trumpeting. He memorizes all of his music, and at games his bandmates verbalize what to play next. In his free time, he teaches marching band and gives trumpet lessons at his alma mater, Portsmouth High School.

What’s next for this talented musician and his adorable companion? Nevins plans to go for his master’s in encryption and material science after graduation, with Mathis by his side.